The Ministry of Health has revealed 13 new cases in the South today bringing the total number to 83.

It comes after director-general of health Dr Ashley Bloomfield revealed there were 76 new confirmed cases of Covid-19, bringing the total number of cases across New Zealand to 589.

A total of 12 people were in hospital with Covid-19 including one in Dunedin Hospital.

The majority of cases New Zealand-wide were still linked to overseas travel, but 10 were now confirmed as being spread by community transmission.

It is not known if any of the cases in the South have been spread by community transmission.

The rise of 13 in the South means the Southern District Health Board area continues to have the second highest number of cases after Auckland DHB.

A major reason why the South has so many cases is the cluster linked to the World Hereford Conference in Queenstown.

This is linked to 19 confirmed and probable New Zealand cases, including many in the South. It is also linked to two confirmed overseas cases.

As of today, the SDHB area continues to have the most cases per head of population, by some distance.

The Ministry of Health also released some details about most of the new cases, including their age and whether they had recently been overseas, however details about where in the South they are from are expected to be released later this afternoon.

The Ministry data records that 11 cases from the SDHB area had not been overseas. It is not recorded whether a 12th case has travelled overseas.

The details for the 13th new case in the South were not immediately available on the Ministry website. 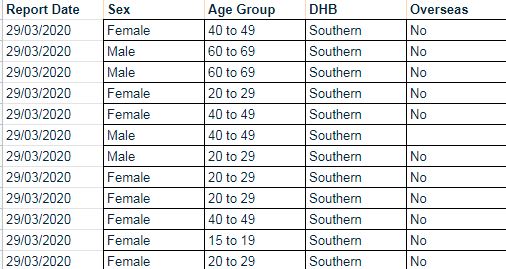 As of yesterday, Dunedin had most cases in South

Data released by the SDHB yesterday of 69 confirmed cases revealed the spread of Covid-19 in the region.

Dunedin had the most cases (25), followed by Queenstown Lakes (24).

Available on demand click here from 7pm every weekday